Where Does Bail Money Go?

Bail is a necessary part of our legal system. It helps defendants who are awaiting trial to continue living their lives while ensuring their presence at all preliminary hearings required to resolve the case. When bail bond companies post bail, they also take on responsibility for any costs or obligations related to the person’s release from jail. Before diving into what happens to bail money and where it goes, we’ll first review what a bail bond is.

What Is a Bail Bond?

A bail bond is a surety bond that is put up by a bail bond company to assure an arrestee’s presence at all court hearings. When the bail bond is posted, the court will release the arrestee.

Since the enactment of the Bail Bond Regulatory Act in 1937, the California Department of Insurance (CDI) has overseen bail bonds. Bail bonds are insured by licensed bail agents, who serve as the authorized representatives of surety insurance firms. A bail bond is effectively an insurance policy that allows you or someone helping you to avoid paying the entire bail amount to the court while you’re awaiting sentencing.

Bail bond costs are usually calculated as a percentage of the whole bail amount. For example, if the judge sets bail at $100,000, a bail bond company would typically charge somewhere around a 10% premium ($10,000) to help you post bail. 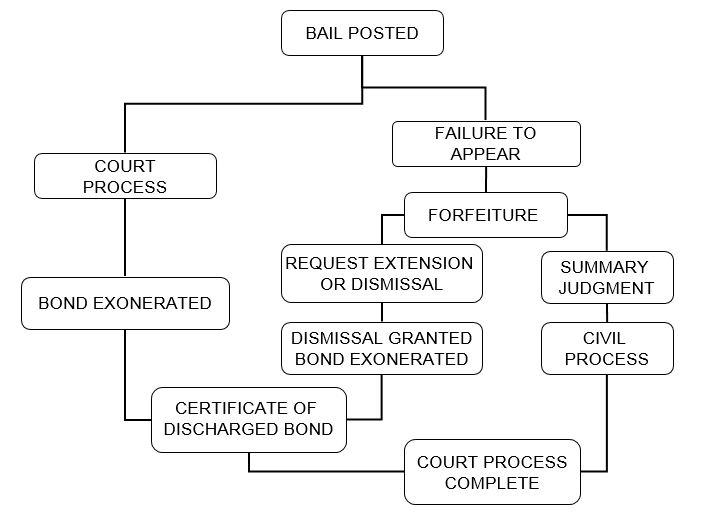 Where Does Bail Money Go?

According to the Innocence Project, 97% of all defendants who get bail need to borrow the cash. Unless you have rich relatives, you will most likely hire a bail bondsman. He charges a fee, which is typically 10% of the bail release, up front and non-refundable.

If you’re wondering where bail money goes when you post bond, it goes towards the total bail amount and is held in a special account until the case is resolved.

In order to retrieve that money when charges are dropped or it’s time for trial, defendants must provide proof of release which could include written notice from authorities indicating they’re no longer required to stay at their current location.

What If the Defendant Is Found Convicted For The Crime?

The court holds bail money until the case is resolved. So long as the arrested defendant appears in court at the designated required dates, bail money will be provided back to the person who posted it. In some cases where the defendant is convicted, bail money can be used to pay court fines.

If you’re using a bail bonds company to post bail, the premium you pay will not be paid back regardless of what happens with the case. However, should you choose to post the entire bail amount yourself, you will need to wait until the defendant has successfully appeared in court on all required dates and the case is resolved.

Where Does Bail Money Go If Charges Are Dropped?

Even if charges are dropped, defendants may not get their bail money back immediately. Some jurisdictions require the return of all or a portion of that money in order to be used towards fines, fees or restitution. Where this isn’t required by law, it may still be part of the defendant’s individual release agreement and any conditions for getting out on bail.

How To Get Bail Money Back

Cash bail will be returned once the defendant appears in court as scheduled, is not found guilty and the case is dismissed. Even after a person is found not guilty or the charge is reduced, it can take up to 6 to 12 weeks for bail money to be returned. If the defendant fails to show up for scheduled court appearances, his or her bail amount will be forfeited. This can also result in a warrant for arrest being issued by police authorities.

How Is Bail Amount Determined?

The amount of bail is decided by a court or magistrate, who considers a number of criteria including:

It’s a good idea to reach out to an attorney with experience in your jurisdiction for help determining how much bail will be set if you or someone you know is a suspect in a case where a bond needs to be posted.

We hope that this information has provided you with a better understanding of the court system and what happens to bail money after it has been posted. Consider how much the courts are asking for before deciding whether or not to post bail for yourself (or someone you care about). If you’re not prepared to pay the entire sum, you’ll want to find a reputable and affordable bail bonds company. The Bail Boys provides the fasted, cheapest and most reliable bail bonds services throughout Southern California. Give us a call to discuss your options today!