Restraining orders are common in situations where a victim has reasonable evidence that another person is harassing or endangering them. This article explores factors around California restraining orders and the amount one has to pay for bail if they’ve been arrested for breaching the order.

What Is a Restraining Order?

A restraining or protective order refers to a court document that protects one from offensive behavior by another party. The party protected is referred to as a protected person, whereas the defendant is known as a restricted person. In some cases, a restraining order protects more than one party, e.g., children of the primary protected party.

A restraining order protects against physical violence, abuse, threats, and harassment. If someone gets a restraining order against you, California law provides means to notify you. Such means include verbal notice, in-person judicial notice, and a copy of the order mailed to your address.

Can I Go To Jail for Violating a Restraining Order? 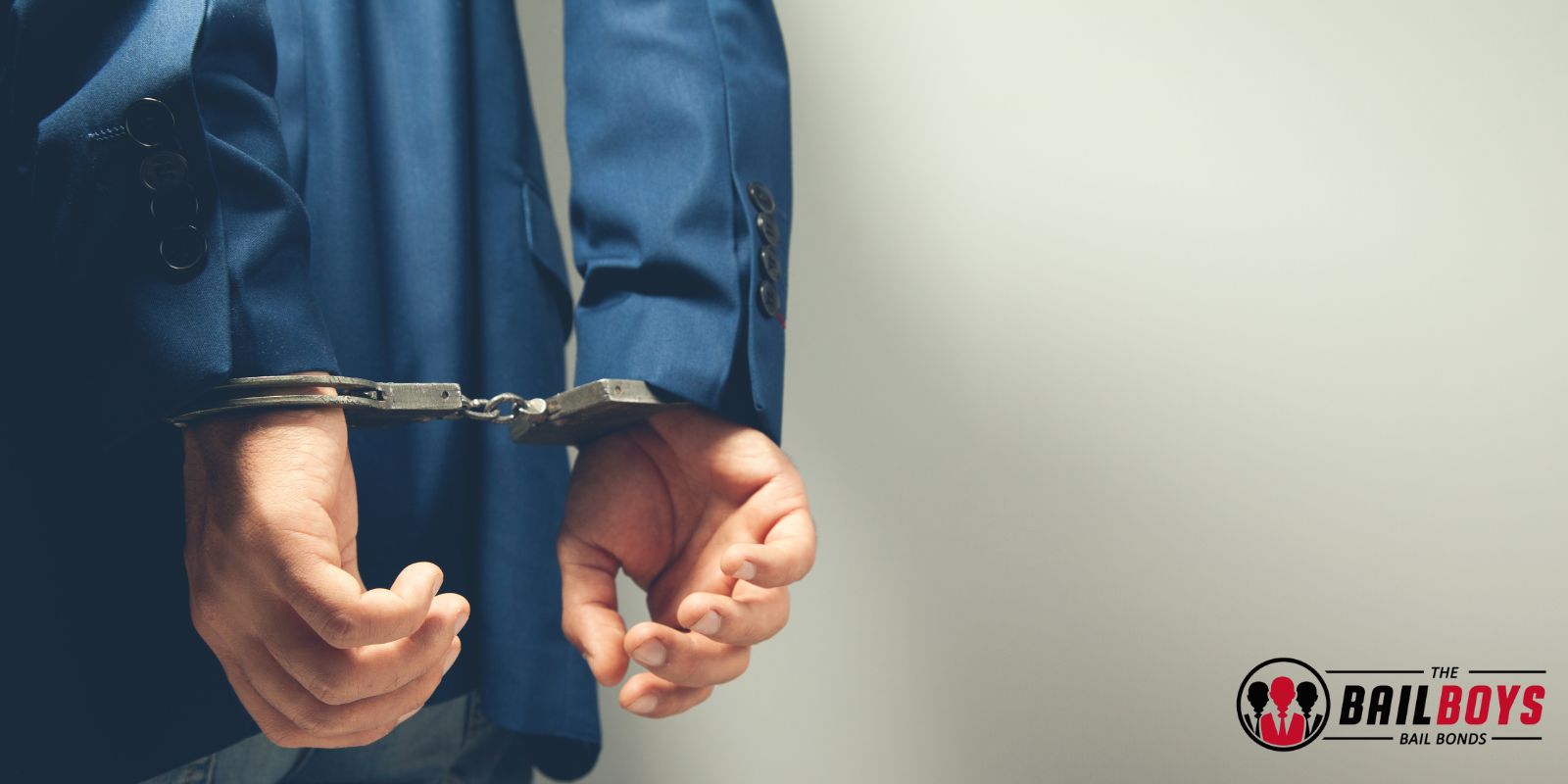 Yes. A restraining order is a court order bound by state and federal laws.  A person who violates a restraining order will face one or more charges, including the potential of jail time. If the court allows it, defendants can post bail to stay out as they await a hearing.

What Is The Bail Amount for Restraining Order Violation?

The bail amount you pay depends on several factors, including:

With an alleged crime, the courts may consider the suspect a danger and will set a very high bail amount.

How Much Is Bail for Violating a Restraining Order?

Bail for a restraining order violation starts at $15 000. Bail bond costs depend on different factors. For example, you’ll face a high bond when your case involves children. Sometimes, the bail bond is too high, and you need help. In such cases, use a bail bondsman who organizes a bond in place of cash bail. 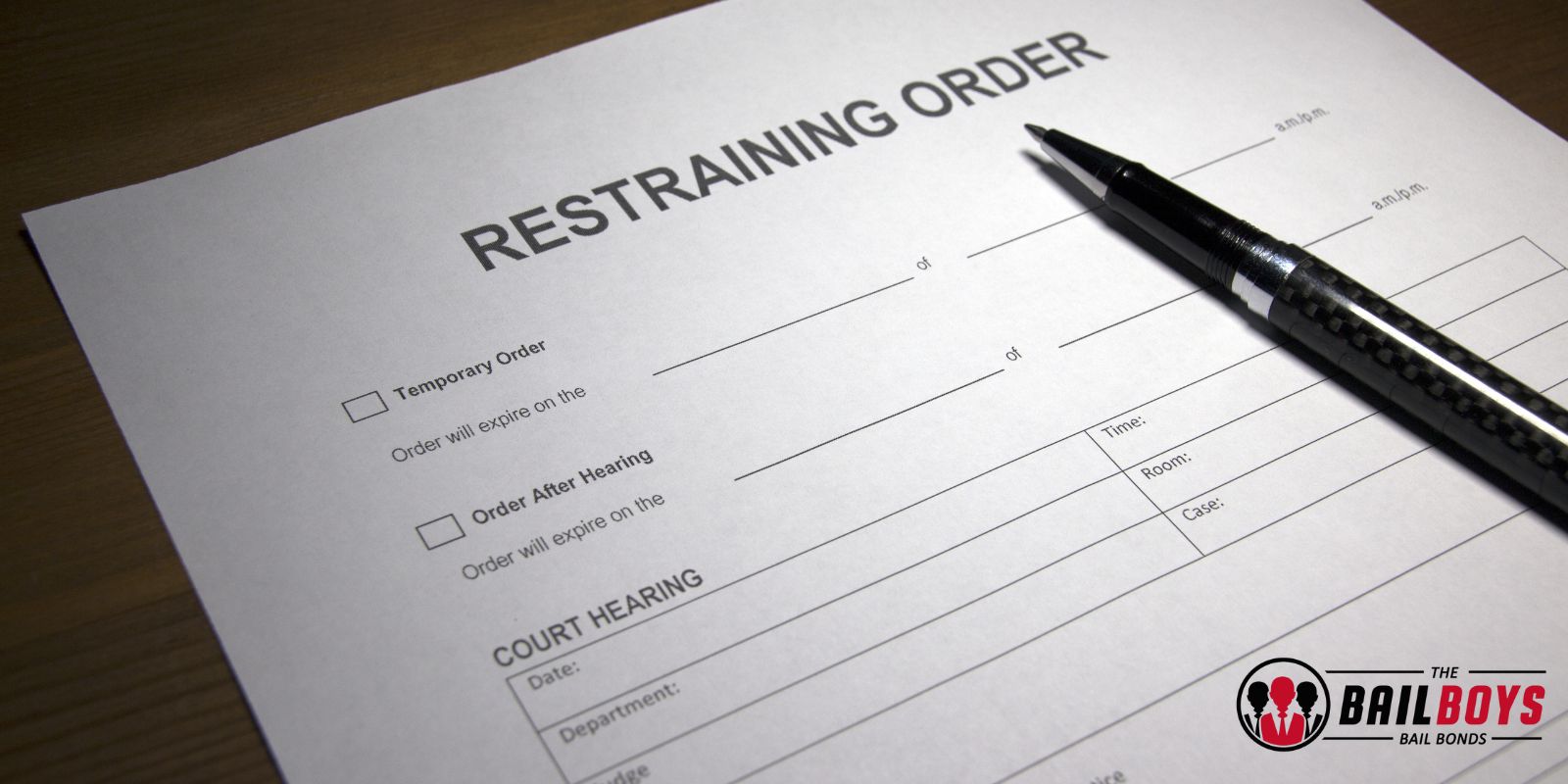 A restraining order in California contains specific information that determines the level of restriction imposed. For example, in some cases, the order restrains only physical contact and states the closest distance the restricted can get to the protected. Calls, social media interactions, messages, etc., can also be forbidden.

Notification of a Hearing for a Restraining Order

If someone presents an application for a restraining order, the county clerk schedules a court date hearing for the case. The alleged victim must appear in court, but if the defendant fails to appear, the session will still go on. Nonetheless, the judge will make the order without the defendant’s side of the story if the defendant skips court. 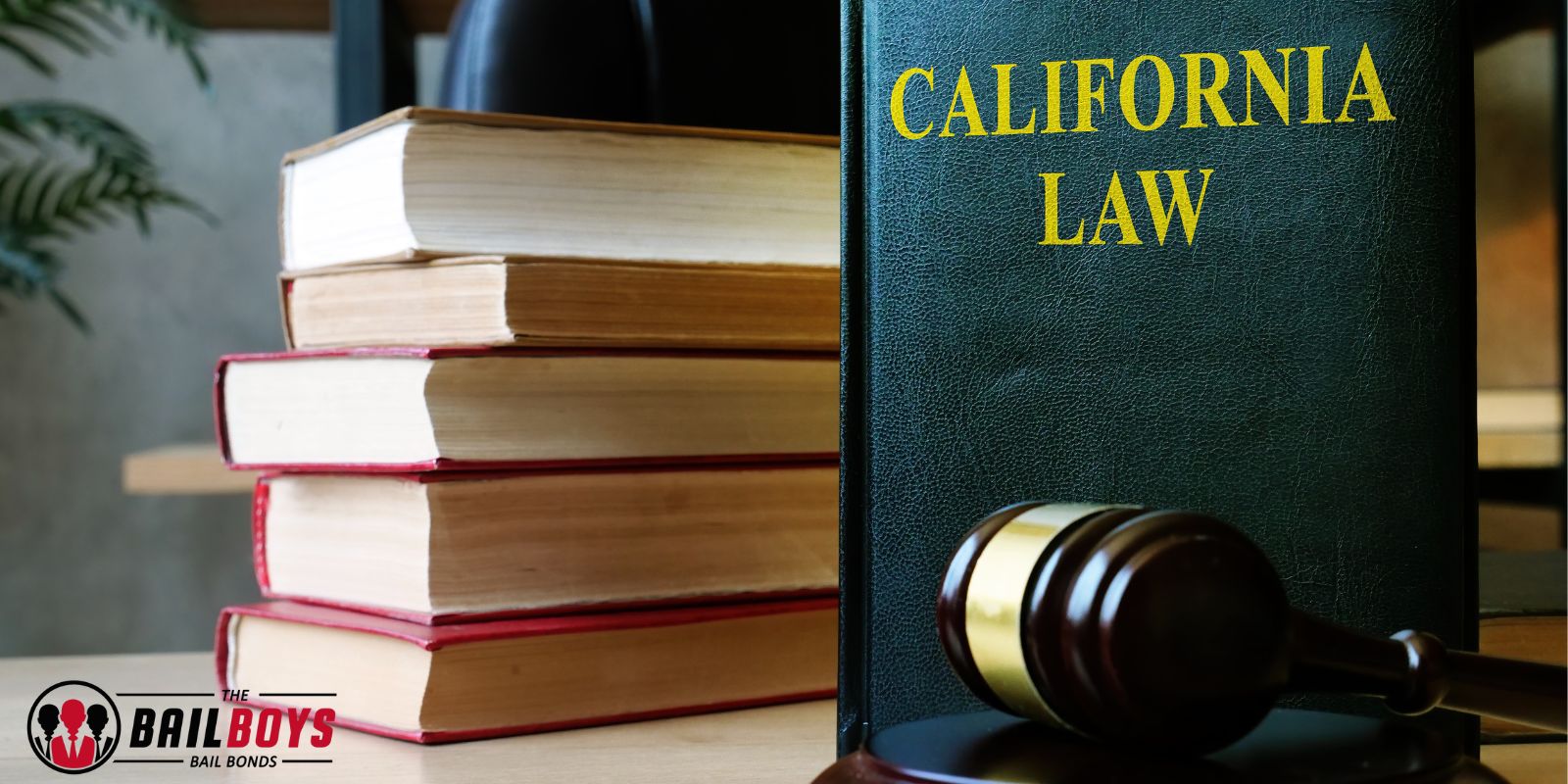 The various levels of protective orders set different limits on the restricted party. For example, the California department law has two typical levels of restrictions as follows:

A judge approves restraining orders based on any behavior that threatens the safety and peace of the other party. The behavior could be done in person or via other means like social media and include the following:

Intimidation, harm, discussion, and the possible occurrence of such situations call for protection. Thus, a judge in a criminal case issues a stay-away order to protect a crime victim or witness. The judge always gives a stay-away order after the defendant faces charges or is found guilty of particular crimes. 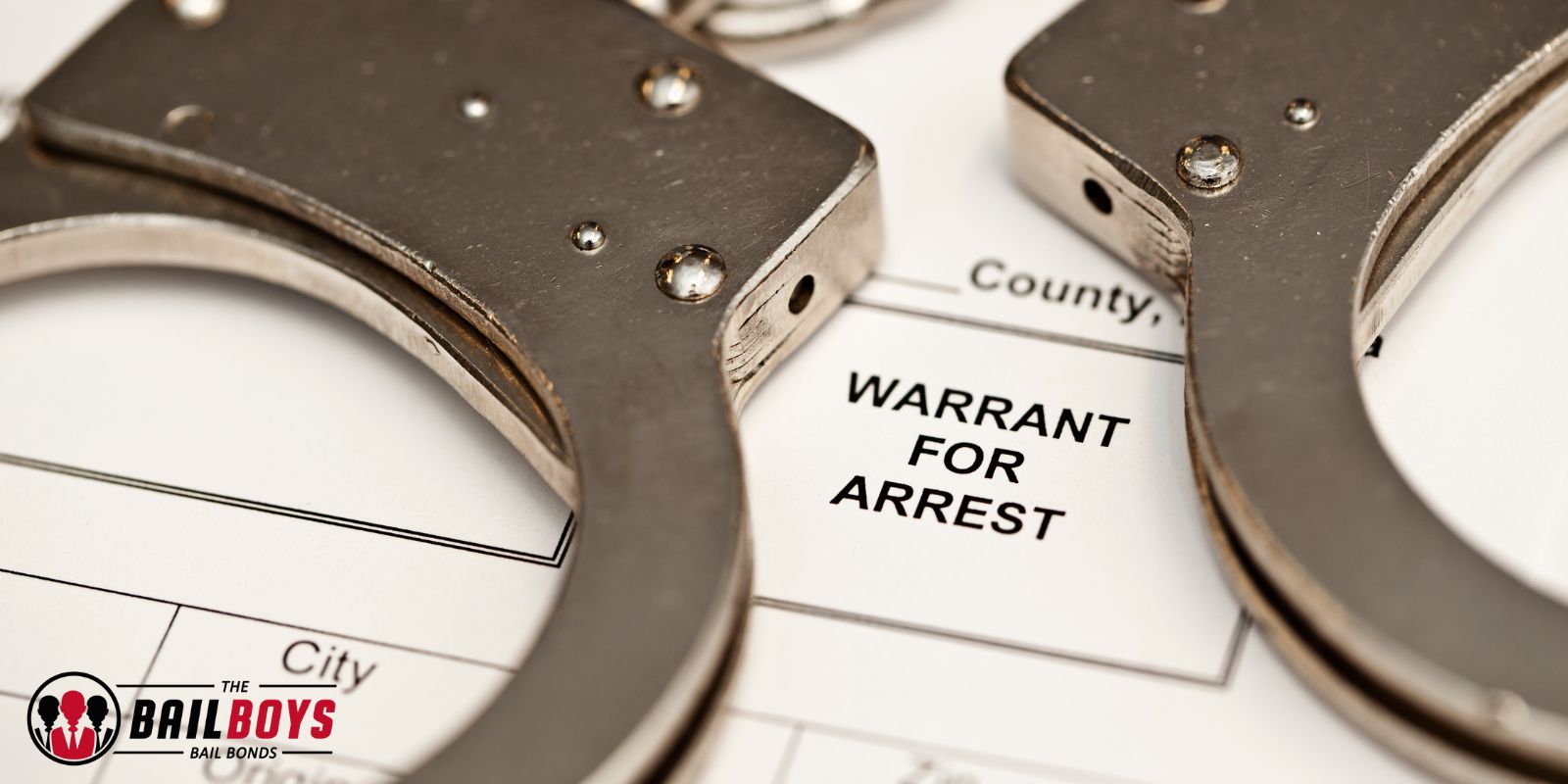 California has four types of protective orders, as shown in the list below.

Yet, the most common is the Domestic Violence Restraining Order (DVRO). DVRO applies to people who’ve dated or had a family before. A restraining order requires that the restricted party avoids different kinds of contact with the protected person. Such include social media, personal interactions, phone calls, texts, and email.

Emergencies occur when a victim needs immediate relief from an abusive family member. A judge or police officer can also request an emergency DVRO after an allegation of domestic violence. The perpetrator has no involvement in the process but only gets a notice to stay a given distance from the victims.

Temporary DVROs apply when the victim wants to seek a full restraining order but needs immediate protection. With insufficient evidence for the charge, the court can deny the DVRO. Similar to an emergency DVRO, a temporary DVRO only lasts for 15 to 21 days and isn’t for emergencies.

The emergency and temporary DVROs protect the alleged victim until the hearing for the restraining order. A full DVRO lasts a long time and could go for up to five years if the judge finds reason to issue one. The order has requirements of what the perpetrator shouldn’t do or prohibited places. 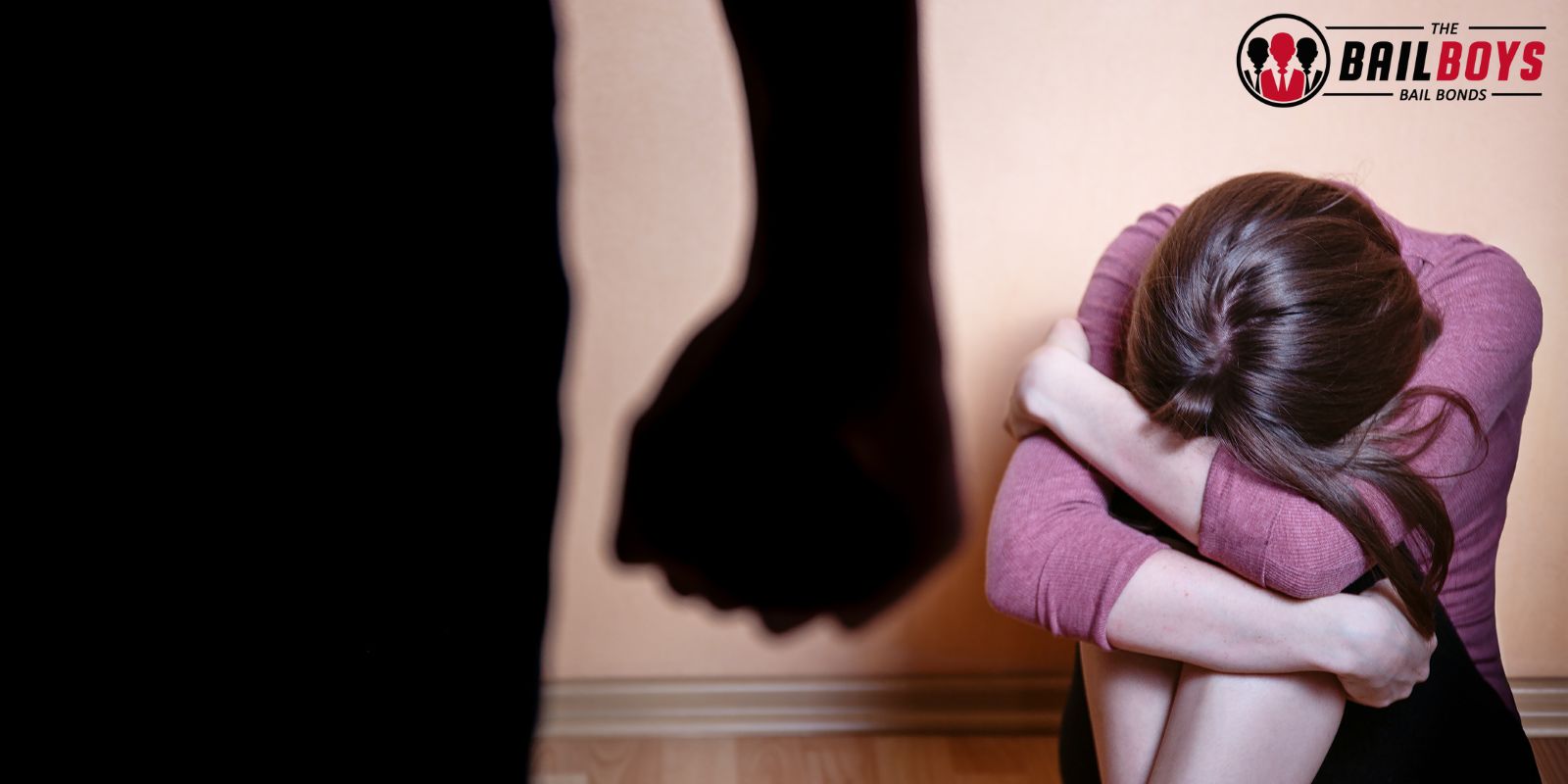 Many DVROs against a spouse or an ex-spouse are valid, but other situations also call for a DVRO. Such situations include:

The Legal Definition of Domestic Violence

Domestic violence is defined when someone you are related to through marriage or blood does any of the below acts.

Domestic violence isn’t limited to the actual infliction of injury or assault. Other topics like custody, safe court processes, and protection orders are within the realm of domestic violence.

What Are Related California Offenses?

The violation of a restraining order is always related to several domestic violence offenses, such as:

How Long Can You Be Notified of an Arrest or Other Violation?

The protected party must report and let law enforcement act upon the report. The court will serve the restricted party an order if the violation occurs due to a lack of knowledge. If the evidence for a willful violation is available, the police find and arrest the restrained party.

How Long Does a Restraining Order Last?

After a court hearing, the judges granted a restraining order for up to five years. The protected party can request an extension if reasons for reasonable fear exist when the period elapses. The extension can go for a further five years or be permanent and doesn’t depend on new incidences of threats.

Can I go To Jail for Violating a Restraining Order?

Violation of a restraining order can either be a misdemeanor or felony based on the situation at hand. A misdemeanor attracts fewer penalties than a felony; for example,

Can a Victim Violate a Restraining Order?

Are there Immigration Consequences?

Violation of a restraining order doesn’t have any effect on your immigration status. Nonetheless, you remain deportable if you are a non-citizen and violate DVRO. The violation can be due to non-violent actions. Also, if you commit an aggravated felony, you could be marked as inadmissible or deported.

Failure to observe the requirements of a restraining order attracts fines, jail terms, and other penalties. If the order involves children, the bail amount increases and could even be double the required amount. If you, your friend, or your family get arrested for a restraining order violation, the court gives a hearing to set the bond amount.

The California law has measures to handle violators of a restraining order. So, the restricted party should always adhere to the conditions of the restraining order. Penal code 273.6 makes violation of restriction orders illegal and can result in arrest and prosecution.

The Crime of Violating a Protection Order in California – Penal Code 273.6

Penal code 273.6 PC stipulates that intentional violation of a protective order attracts a fine, jail term, or both. A typical violation is a misdemeanor and attracts fewer charges than a violation with violence. Examples of violations are when the restrained party:

Whereas restraining orders protect the alleged victim, evidence of threat must exist for a successful process. After the court hearing, the protected party convinces the judges that the evidence is enough for abuse. Whereas a lawyer isn’t mandatory, legal help will increase the chances of a fair outcome.

Does a Conviction Affect Gun Rights?

Convictions affect gun rights because you aren’t allowed to possess firearms under a restriction order. Instead, you must relinquish the guns to the law enforcement body. Alternatively, sell the gun to a licensed dealer.

One of the ideal ways to protect the victims of domestic violence is through a protective order. The order protects spouses, ex-spouses, and other parties close to the offender. Protective measures restrict personal conduct and physical proximity and could require a party to move out.

Can a Restraining Order Be Issued Without The Respondent Knowing The Petitioner?

You can use three legal defenses against a restraining order violation charge:

How Does The Prosecutor Prove The Charge?

Under PC 273.6, the prosecutor should prove the below factors to convict you.

Can a Person Get a Conviction Expunged?

An expungement clears the restricted party of certain misdemeanors or felonies. You are eligible for it if you didn’t get any state prison time. After expungement, your conviction remains in the FBI and other databases, but the records remain closed from public reach.

Restraining orders are a civil matter hence don’t always appear on background checks. Nonetheless, in-depth criminal background checks like security or United States military clearance show the orders. Another instance where the order may show up is if the associated cause of the order is a criminal offense.

Let’s take a look at some common questions regarding the bail amount for violating a restraining order:

How long do you go to jail for violating a restraining order in california?

Violation can happen in different ways and fall under the categories of felony or misdemeanor. A misdemeanor attracts up to a one-year jail term in the county jail. On the flip side, a felony results in 16 months to three years jail term in the state prison.

What happens if you violate a restraining order in MA?

A restraining order violation in Massachusetts attracts probation and/or jail or 2.5 years in the house of correction. Besides, criminal charges interfere with your ability to get citizenship, a job, or housing. Finally, if you are a non-citizen, you could get deported.

PC 273.6 isn’t a felony but a code that specifies actions to be taken against violators of restraining orders. Based on PC 273.6, intentional violation of a protective order is a misdemeanor. The punishments of the breach could be a fine, jail term, or both.

If your friend or family member gets arrested for violation of a restraining order, bail costs can vary. California bail bonds are available to minimize the financial burden. Call The Bail Boys today and get free estimate.